A river runs through it: Revitalizing the Los Angeles River

From the dawn of recorded history, humans built cities along rivers. Over 6,000 years ago, Sumerian city-states grew along the fertile banks of the Tigris-Euphrates rivers system, relying on these rivers for irrigation and transportation, water to drink and fish to eat. And in the millennia to follow, from the Yangtze to the Mississippi, across the continents rivers have been the enabling arteries of civilization.

As cities expanded along their rivers, city leaders built dams and levees at an unprecedented scale to contain them from flooding. And at the same time as many urban rivers were transformed into gigantic drainage culverts, their waters were fouled by contaminated runoff, poorly treated sewage, and outfall from industry.

The turning point in the United States was in the late 1960s and early 1970s, when the modern environmental movement began to build a political movement to address polluted air and water. A defining event of this era came in 1969 when the Cuyahoga River in Cleveland was so polluted it literally caught fire. The Cleveland Press at the time reported the Cuyahoga as a river so polluted that it “oozes rather than flows.”

Significant progress has been made cleaning up urban rivers in America and around the world, although in nations that are still rapidly industrializing progress has been more aspirational than actual. But concurrent with this progress, another trend emerged, starting in the 1980s. The goal is not only to clean up urban rivers, but to revitalize them. From Philadelphia to Portland, cities across America are rediscovering their rivers not only as waterways to be purified, but as aesthetic treasures to be restored.

Nowhere is the potential and complexity of urban river revitalization more evident than in the multifaceted, continuously evolving efforts to restore the Los Angeles River. It encompasses all the highlights of a universal story. In the beginning, the river ran unobstructed from its headwaters in the San Gabriel Mountains into the Pacific. Many of those peaks are in excess of 9,000 feet, and the crest is barely 30 miles from the ocean – so when clouds dumped rain against these ramparts the runoff dumped rich silt onto a broad floodplain.

Early settlers believed they were living in an Arcadian paradise, and as the city grew from a small pueblo into a bustling town, the Los Angeles River provided ample water for people and farms. But with the construction of the Los Angeles Aqueduct in 1913, which tripled the available water for the growing city, the value of water from the Los Angeles River became less appreciated, at the same time as its propensity to overflow its banks became a liability. After two massive storms hit Los Angeles in early 1938, generating floods that caused massive damage and killed over 100 people, the citizens overwhelmingly supported a solution that would finally tame the volatile river. The 1930s was a decade characterized by big engineering projects in America, and into Los Angeles came the Army Corps of Engineers to channelize the entire 51 miles of urban waterway.

By 1960, with its transformation complete, the Los Angeles River had acquired its now iconic look: as a gigantic culvert. Surrounded by high-voltage power lines, industrial depots, sweatshops and prisons, the river became a dystopian wasteland, its natural splendor erased. Apart from serving as the biggest prop in movie history, an often post-apocalyptic backdrop for hundreds of movies and television shows such as Terminator, the Los Angeles River was forgotten.

The national awakening to environmentalism in the 1970s brought renewed awareness by local residents to the Los Angeles River as an example of industrial disregard, and also, increasingly, as a neglected amenity with spectacular potential. Over the past 20 years, serious efforts have begun to transform the river into a glorious connective centerpiece of a great city. It’s not going to be easy. 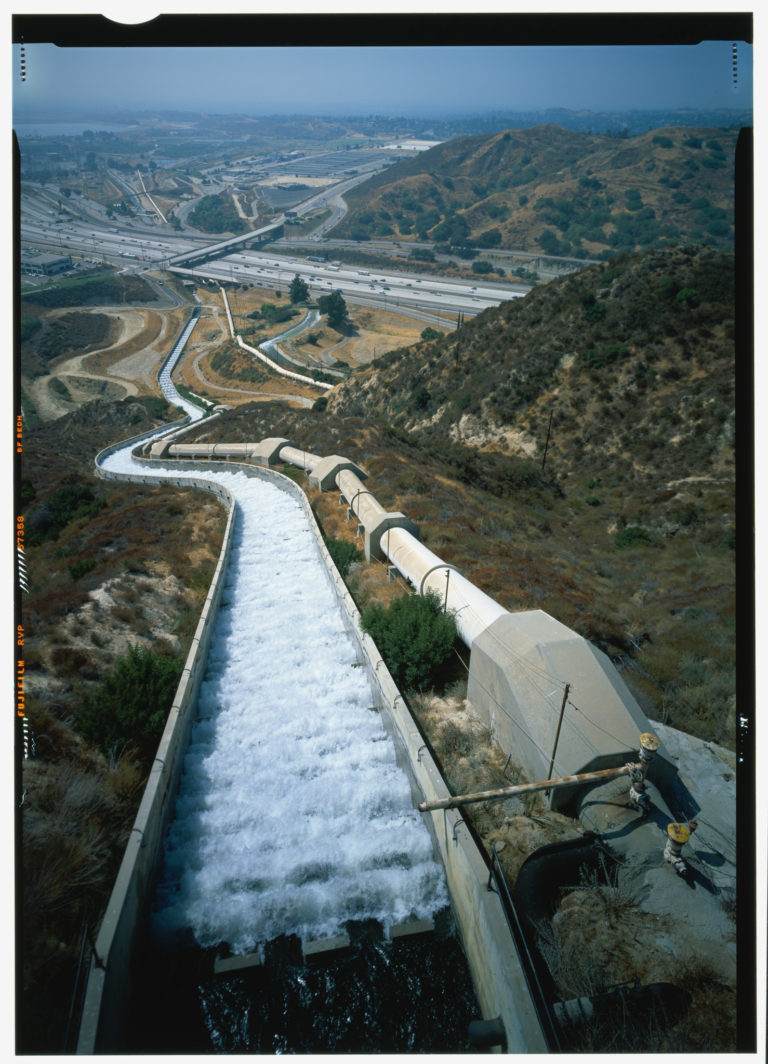 Revitalizing an urban river is an undertaking that requires incorporating and balancing several potentially conflicting objectives. For starters, whatever transformation is ultimately realized must still fulfill the function offered by the giant culvert: major storms must not cause major flooding. To do that, either the flood channel needs to be left mostly intact, or diversions have to be created along the entire 51-mile length to buffer the runoff during extreme weather. Fortunately, those buffers also serve to accomplish other important objectives.

For example, “daylighting” the many smaller tributaries of the Los Angeles River – opening up below-ground storm drains and turning them into above ground streams – permits rewilding sections of the urban watershed. It also allows percolation in the unlined new channels, diversion to additional storage ponds and spreading basins, and primary filtration of toxic runoff as it flows through vegetation. Daylighting also reduces the volume and velocity of runoff during storms.

The preservation of flood control cannot be overemphasized. In December 2021, in one day 2.3 inches of rain fell in downtown Los Angeles. The downpour was that much or more across the Los Angeles River’s 823-square-mile watershed. Even at that rate, 108,000 acre feet of rainwater fell from the sky, and most of it came down that river because it fell too fast to soak in upstream, and ran right off the paved surfaces in the urban area.

For comparison, 108,000 acre feet in one day is equal to 35 billion gallons per day, whereas wastewater treatment plants on the Los Angeles River discharge 30 million gallons per day – one-thousand times less. To whatever extent revitalization reduces the river’s capacity to handle storms, diversions and storage must make up the difference.

An April 2022 study released by the environmentalist Pacific Institute claims urban storm water capture could add as much as 3 million acre feet to the urban water supply. Doing that would require removing a laundry list of pollutants that are swept into runoff including nitrogen, phosphorus, copper, zinc, hydrocarbons, synthetic organics and pathogens. But treating and storing runoff, while expensive, solves several problems simultaneously. It stores water for urban use, prevents flooding and decontaminates the water that is released into the river.

Along with fulfilling its primary role as an actual river, however, comes the myriad demands of a massive city: The opportunities and challenges of lining its beautified banks with people-friendly amenities. Accommodating the dreams of local politicians and investors. Respecting environmentalist concerns. Welcoming and coordinating participation from thousands of agencies, private interests and stakeholders.

All these documents recognize that no one entity will be able to fund or perform all of the work. In the city of Los Angeles document, a “river management area” is defined – and a community planning framework is established – to coordinate a relatively decentralized development effort involving government, entrepreneurial and philanthropic sources.

Along the entire river corridor, shared goals include restoring water quality, runoff capture and flood storage, and where possible restoring a functioning ecosystem. If further possible, the plans would construct an unbroken river greenway with public-access points, bike and walking paths, parks and wetlands along the entire urban river from Canoga Park upstream down to the estuary in Long Beach.

Nothing about this is easy. Ironically, water quality and flow in the river began to improve when three wastewater treatment plants began discharging over 30,000 acre feet per year of clean, treated water into the LA River. This flow, which has created a perennial stream in the downtown section of the LA River, is now jeopardized as the cities operating these treatment plants make plans to upgrade to direct potable reuse. If those plans come to fruition, that wastewater will no longer go into the river, but instead will be recycled.

Another difficult paradox is the impact of gentrification. By creating desirable green space along what had previously been a bleak concrete culvert, property values soar. As posh restaurants suddenly line the banks of an urban canyon where kayakers frolic below in whitewater rapids, riparian land values soar, and multigenerational families get priced out of their homes and apartments.

In what is perhaps the most thorough recent discussion of how the Los Angeles River may reinvent itself, University of Southern California Professor of Landscape Architecture Alexander Robinson wrote in the journal Places: “There remains an urgent need for further exploration of ambitious strategies.” Such ambition is never easy.

For better or worse, ambitious strategies to alter the urban canvas, however inspiring, encounter resistance that didn’t exist a century ago. More stakeholders. More litigation. Imperatives that perhaps should have been attended to in the old days, but we either didn’t know any better or didn’t care. The idea that a 21st-century version of the urban planning autocrat Robert Moses could achieve a vision for the river in a few short years is unrealistic.

On the other hand, the forces working to revitalize the Los Angeles River have steadily grown stronger and the broad consensus to make it clean and beautiful again will only build in the coming years. It will take several decades before the Los Angeles River has fully realized its new incarnation. The process will be painstakingly slow, but the tide has turned. Where for a time there was only an indifferent metropolis of concrete and steel, a ribbon of life will again nurture wild creatures and human souls.