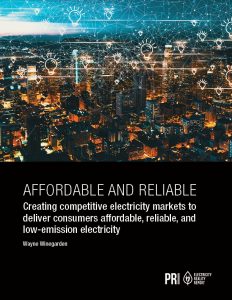 The nuclear option can keep the lights on in California

Californians who have been seen power supplies become more unreliable in recent years have increasingly turned to gas-powered electric generators to keep the lights on during “public safety power shutoffs.”

According to the industry trade group, there are 1.5 million portable generators in use in California today.  The average gas-powered generator can provide 10-12 hours of power to run lights, phone chargers, refrigerators, microwaves and more, with a simple refueling keeping them powered another half-day.

But gas-powered portable generators may be on the outs in California under legislation passed last week and placed on Gov. Newsom’s desk.

According to the Assembly Floor Analysis, Assembly Bill 1346 would “require the Air Resources Board to adopt cost-effective and technologically feasible regulations to prohibit engine exhaust and evaporative emissions from new ‘small off-road engines.’”  It’s another example of a well-meaning bill that would generate serious unintended consequences if it becomes law.

The industry trade group notes that zero-emission power generators wouldn’t work very well in lengthy power shutoffs as current models only have the capacity to run the lights, appliances and technology listed above for between 35 minutes and 3 hours.  In addition, they can’t be recharged very easily during outages without expensive solar panels or backup batteries.

The Senate Floor Analysis of AB 1346 also notes that “while portable power stations such as the popular Goal Zero Yeti can provide power without any associated noise or emissions from the unit, they are ultimately constrained by battery capacity.”  These alternatives “can also be five to twenty times the cost of fossil-fuel powered options.”

Joseph Harding, technical director of the Portable Generator Manufacturers’ Association, says that “when someone turns to a portable generator, it’s out of necessity . . . (to) keep food from spoiling, keep water available, to maintain communication with the outside world, even keep vital medical equipment operating.”

Measures like AB 1346 are examples of the state making big policy changes and imposing sweeping new mandates at a time when technology and the marketplace just haven’t caught up yet.  As much as they try, policymakers can’t dictate people’s buying habits or the evolution of technology by passing a bill.  And when policymakers go down this road, it is ultimately consumers and entrepreneurs who will pay the price.

AB 1346 would also have a negative impact on entrepreneurship.  As PRI’s Wayne Winegarden writes in his upcoming final study in the Breaking Down Barriers to Entrepreneurship series, new government regulations as envisioned in the bill are typical of the regulations that make it so difficult for individuals to start or grow a gardening business in California.

It would make it difficult and more expensive for lawn businesses to operate.  For example, there are many battery-powered leaf blowers on the market today for commercial use.  However, a review by The Spruce of the “8 best cordless leaf blowers of 2021” notes that some models have “hard to find replacement batteries” while the “battery takes a long time to recharge” for others.  The Assembly Floor Analysis of AB 1346 notes, “for commercial uses, there is very little market for zero-emission equipment as today’s technology is relatively expensive and requires multiple batteries and/or frequent recharting and replacement.”

A June Washington Post article on the push for battery-powered lawn equipment described how a Florida-based landscaping firm has “its landscaping vans . . . outfitted with solar panels to recharge the batters on the go” at a conversion cost of $100,000 per van.  The firm’s president says customers are charged “10 to 20 percent more than his competitors.”

Californians now await Newsom’s verdict to see if they’ll have to go out of state to buy a gas-powered generator or will have to sit in the dark the next time the power goes out.