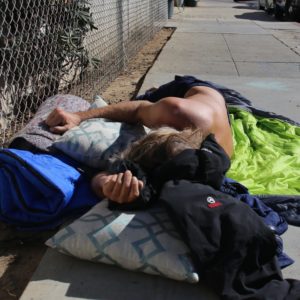 Karen Bass, Los Angeles’ next mayor, has promised to solve the city’s homeless crisis. Let’s hope she will be more successful than Gavin Newsom, who pledged to end homelessness in San Francisco just after he was elected mayor there – and got nowhere.

“I ran for mayor to urgently confront the crises our hometown faces,” Bass tweeted. “To the people of Los Angeles, my message is this: We are going to solve homelessness.”

Earlier this year Bass said “the bottom line is people will not be allowed to live on the streets. There are just some things that you don’t do outside, and sleeping is one of them,” which is the point at which every big city mayor should start and never veer away from. Once sworn in next month, Bass promises she’ll be locked in, making it her first priority to declare a state of emergency over homelessness. While it sounds like just more of the same empty politics we’ve all grown accustomed to, “it’s absolutely not a symbolic gesture,” she told the media.

“​​We have a lot of bureaucratic red tape that needs to be eliminated, and that’s the basis of calling a state of emergency so I can have the power, not to eliminate all of the red tape, but specifically to address some burdens – some hurdles that people have to go through in order to build,” she said.

This should have been done about three or four (or more) mayors ago. Building in California has been choked by layers of government interference, from 1970’s California Environmental Quality Act, to local rules that strip builders of the incentives they need to do what they do best. Elected officials have not done enough to remove these barriers.

While she says many details are to come, two months before the election, both Bass and her opponent Rick Caruso outlined their plans to resolve homelessness to the Los Angeles Times. Caruso’s ideas were simpler and shorter. Had he been elected, his administration would have focused on tiny homes, an interesting idea that as of now looks like it works for some and not others, especially those who don’t care for the solitude and miss their “families” at homeless encampments; and sleeping pods, described by the Times as “​​temporary, transportable structures assembled like office furniture inside existing buildings with walls separating sleeping areas.”

Bass’ nine-point plan relied heavily on standard let’s-just-spend-more-money-on-housing ideas, such as, Project Roomkey and Project Homekey, both of which are based on the housing first solution, which is in practice, no solution at all.  PRI’s research shows that despite billions spent, the program is expensive and ineffective, as the latest data shows the homeless population grew statewide and in many counties in 2021.  The status quo has also produced expensive embarrassments such as homeless housing units in Los Angeles costing as much as $837,000 each to build.

But Bass also addressed the mental health and substance-abuse problems that drive much if not most of homelessness, and suggests issuing as many as ​​1,500 housing vouchers for veterans.

Regarding the former, Bass wants to open 750 beds for mental health and substance-use care. One avenue is to reopen the closed St. Vincent Medical Center and its nearly 400 beds in the Westlake neighborhood as a residential treatment center. The facility is owned by Dr. Patrick Soon-Shiong, who also owns the Los Angeles Times. While Soon-Shiong has issued a statement in which he says, “medical care and mental health services are important issues in confronting the homelessness crisis,” and is “pleased that Congresswoman Bass is raising these concerns and looking for solutions,” it’s not clear how this will, or even could, play out.

What is clear, though, is that there is no way to make progress in resolving the homelessness crisis unless the homeless are properly treated for the mental health demons and addictions that are the direct causes of their homelessness. It will be expensive, but the funds are there. Just look at the billions that have been spent on failed programs. Those dollars would be better spent on an approach that will yield real results.